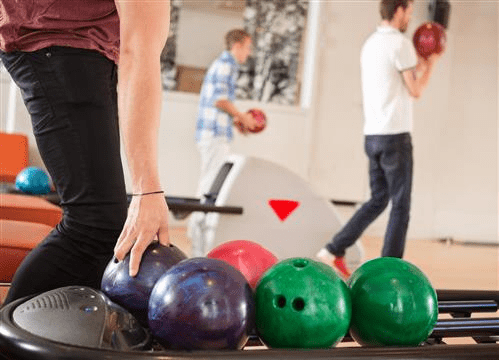 The Evolution of the Bowling Ball

Bowling is a sport for the ages, thought to have originated in ancient Egypt. Though bowling has been enjoyed for thousands of years, the version of the game we know today is only about 100 years old. Unlike primitive lawn bowling, modern bowling is now fully standardized, including regulation bowling balls, pins, and bowling lanes designed to cater to the official rules of the sport. Of the modern advances in new bowling equipment, the bowling ball is by far the most interesting due to its many improvements over the years.

In ancient times, rustic bowling balls were made with … well … whatever was available! In the early days of the sport, balls were often shaped by corn husks, and then bound with leather and string. Most primitive bowling balls did not have gripping holes and forced the bowler to “palm” the ball during each turn. Archaeologists have uncovered ancient bowling balls made from porcelain, as well, indicating that these may have been rolled along the ground, rather than thrown, due to their size and weight.

Bowling Balls in the Modern Era

As bowling became more popular over time, bowling equipment makers began to create balls from hard wood like lignum vitae. In the early 1900s, manufacturers took the design to the next level and began fabricating bowling balls made from hard rubber. Believe it or not, this trend lasted well into the middle of the twentieth century, when polyester was introduced in the 1950s and 1960s as an ideal bowling ball medium.

Bowling balls continued to evolve, through to the present day, incorporating several pieces as part of the ball’s structure. In the 1980s, polyurethane coverstocks, the name given to the ball’s surface layer, became popular. Polyurethane gave players an edge over traditional polyester balls due to the friction that could be created between the ball and the lane surface. Polyurethane coverstocks also allowed bowlers to generate more hook on the lane and more entry angle into the pins than ever before.

A decade later saw the advent of “reactive resin,” which increased overall porosity and allowed for even-greater friction with the lane surface. To this day, reactive resin coverstocks are still the most popular in the game.

In the 1990s, manufacturers also began experimenting with advanced cores, or dense blocks within the ball that modify the ball’s balance. New core advancements increased the amount of hook a bowler could generate.

Components of the Modern Bowling Ball

o   Reactive Pearl – Used in many types of balls, it provides lower friction for the oiled portion of the lane

o   Hybrid Reactive – Gives the bowler the best of both worlds, using a combination of solid and pearl reactive

o   3-Piece Cores – Primarily used in plastic balls and comprised of three pieces, including an inner core, the coverstock, and a pancake-shaped weight block at the top

o   Asymmetrical Cores – Used in high-performance bowling balls to fine-tune the ball to a bowler’s specific style. Usually incorporated into custom-made balls (for example, matching the drilling style to a player’s speed and revolution rate)

Check back here each week for more about the history of bowling, and tips for your game. To learn more about state of the art bowling equipment for sale, call Murrey Bowling at 310-532-6019.